Directions to the Aquazoo 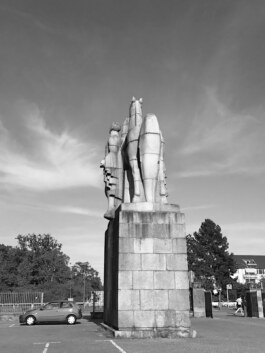 It takes up to twenty five minutes. The train ride.

Depending on traffic and whether the school kids are playing

in the doors, but usually about twenty minutes.

You can expect them from one until the afternoon.

The station you want is called Nordpark/Aquazoo.

You get out of the train.

You cross the street.

Pass the old ladies with hats that were once appreciated.

If there are no cars and no children

you can cross on red.

on red and not on zebra walks).

So you cross the street,

if they are nowhere to be found;

by their side. You don’t miss it.

They are from the second world war.

Right before it actually.

Their size indicating that they were made ‘for eternity’.

You find them uncanny.

You notice one of the statues is rough, uglier, like it’s unfinished.

You find out what the deal is later.

You can’t smell anything because of the cold you have.

The trees and the nine brick garden gates,

(that most likely look oriental and charming in the summertime)

(ivy covering and crawling over every stone)

are as well from that time.

Under the sharp December sky only brittle ivy corpses remain.

You do smell a cigarette now.

A smoking, angry sounding couple is walking towards you.

You move out of the way.

On your right hand, on the red sand is an old German house.

National and you guess: romantic.

Also from the second world war.

A porch of stone and a dark brown roof, shaped as a trapezoid.

You don’t know how you feel about this design.

like a net. The pale bird probably lives there. One on each side

guarding the naked corners of the shapes.

Your eyes back up again, they notice:

there is a pond,

perhaps once a fountain, stone

and grey as well.

A dried up circle on the red sand.

You remember a trip with grandparents to a shore somewhere.

You don’t know where, you were just a kid.

Your eyes drift now, they think:

even though, some said the horse statues did not do the idea

this is a place where Nazis could have had summer walks

under the ivy tunnels

because evil people have barbecues too.

In front of you is the aquarium.

I think the puffins there are unhappy.